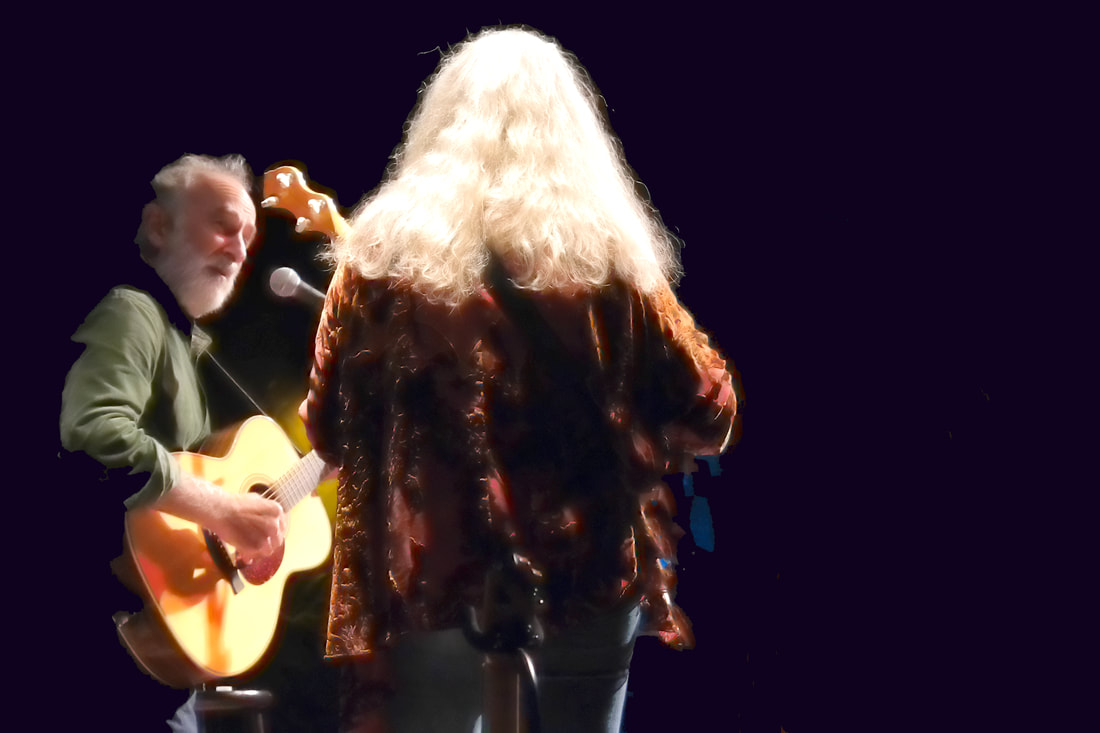 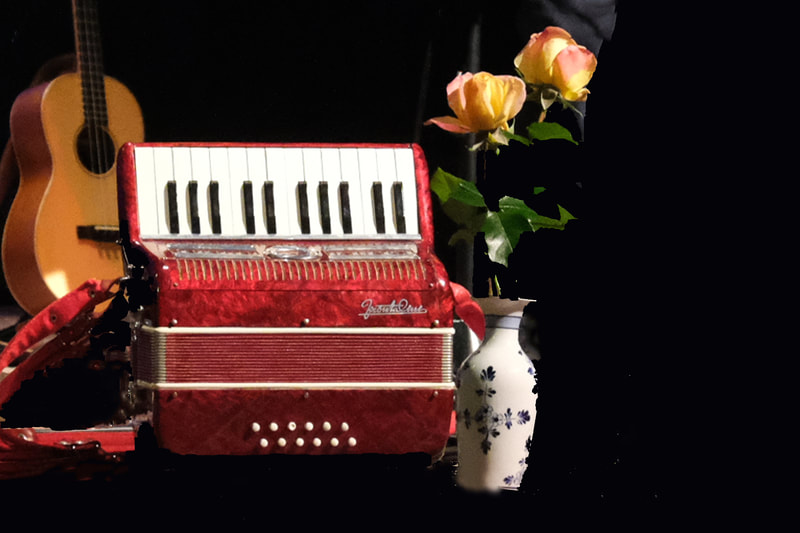 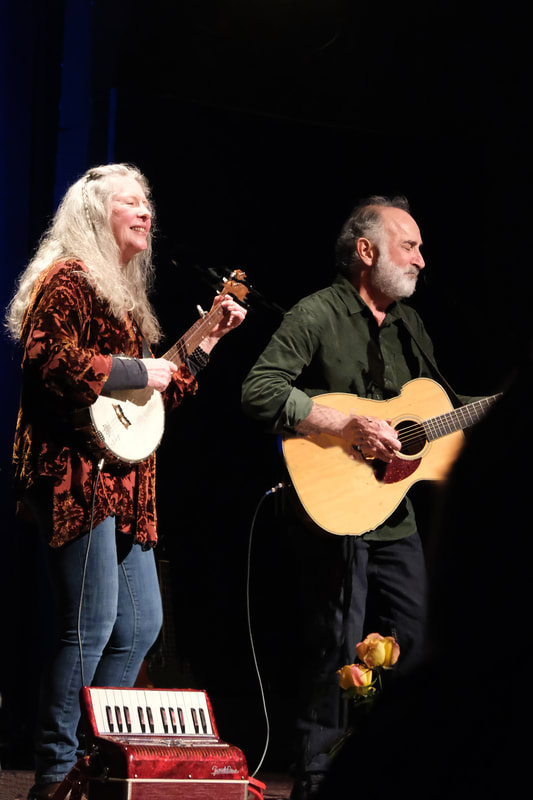 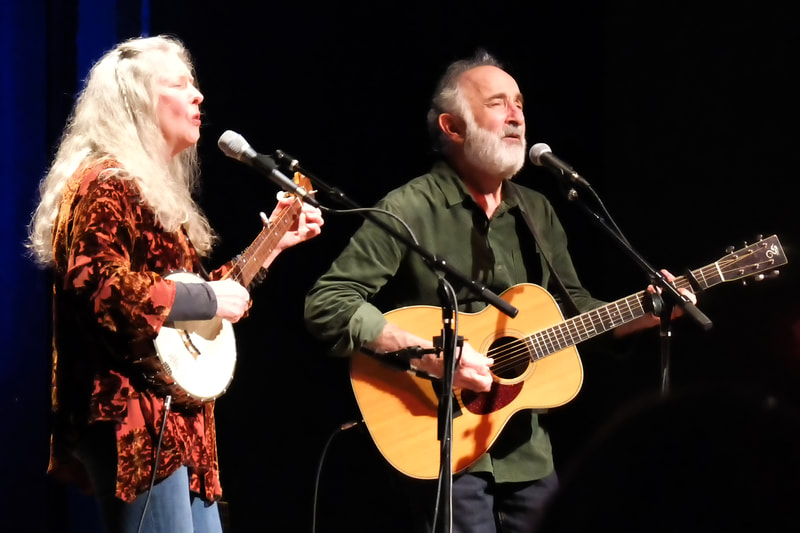 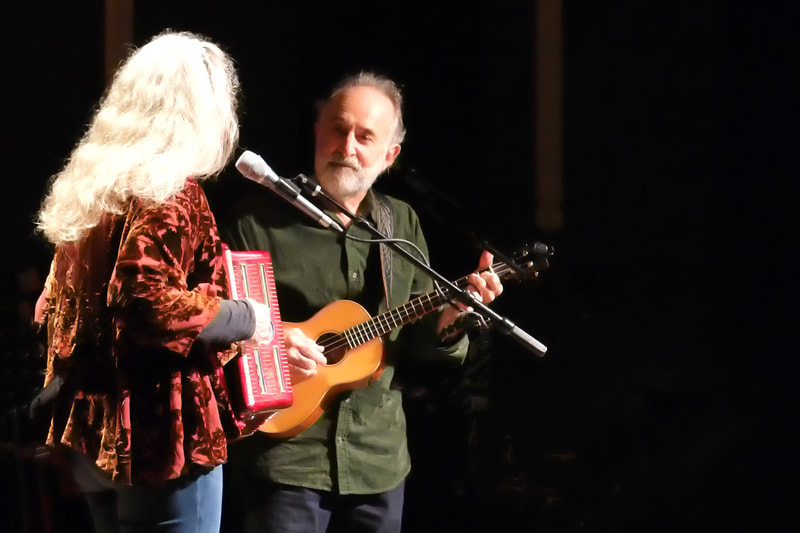 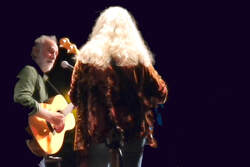 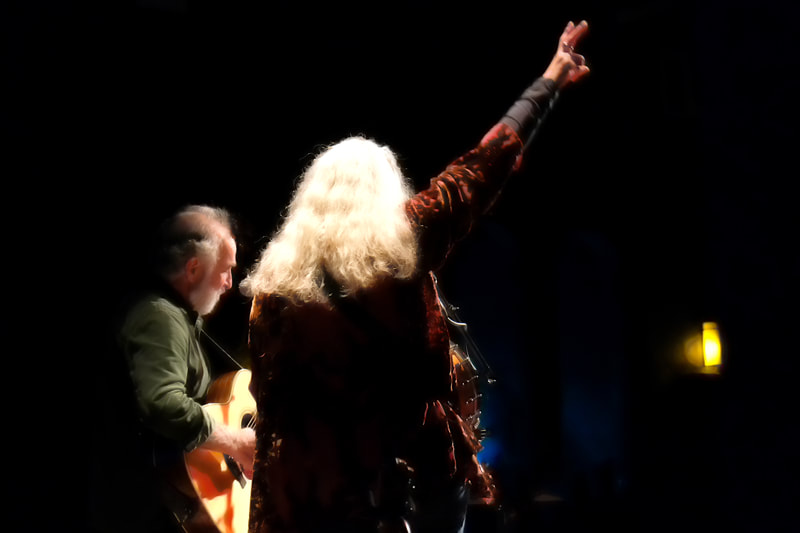 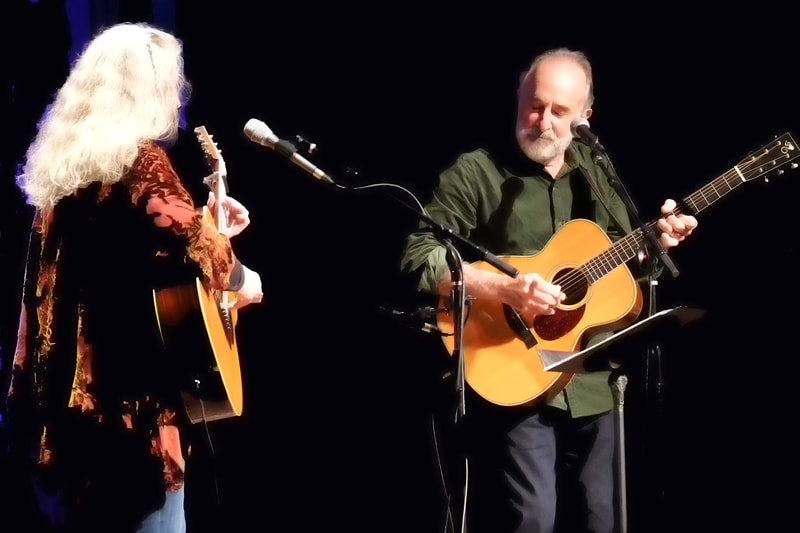 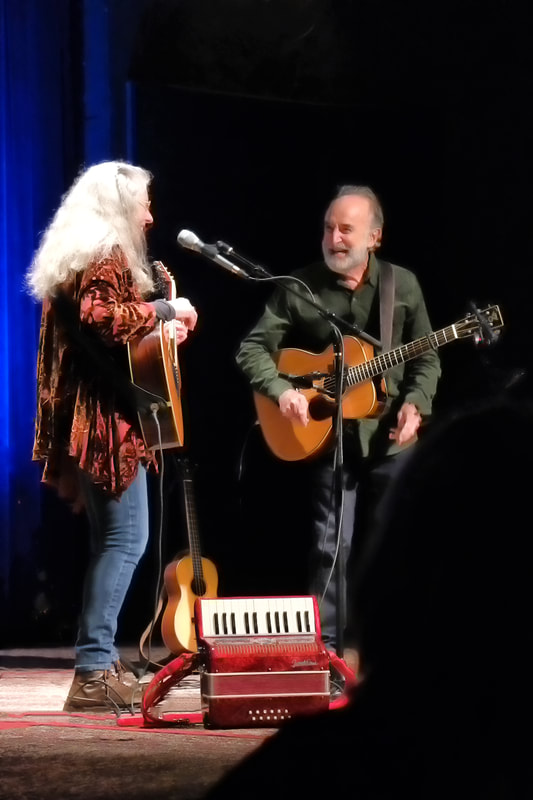 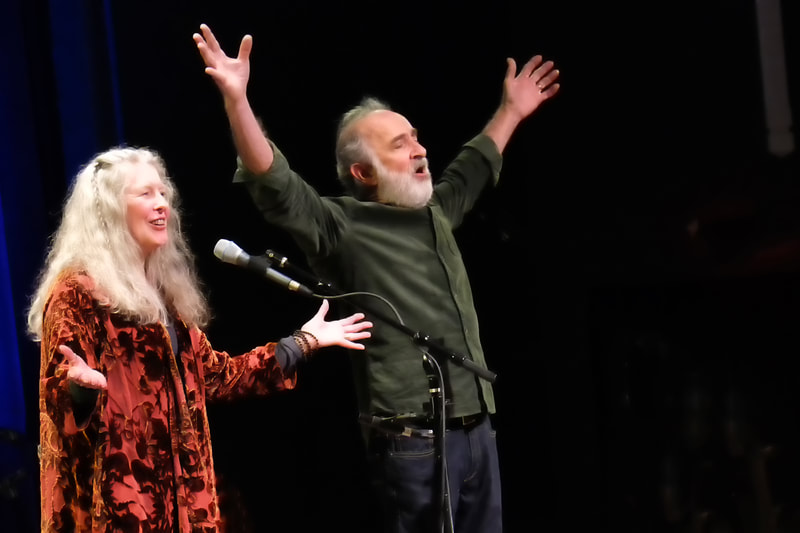 Kate Power and Steve Einhorn are lifelong musicians, songwriters, teachers, and were the owners of the world renowned performance venue, music school, and instrument shop, Artichoke Music in Portland, Oregon (1981-2006). Portland Romance, their ninth album includes Vocal Cut of the Year 2017 Paddy's Lament. They won the Music2Life award for the song,"Travis John" at the Kerrville Folk Festival, and have shared stages with folk luminaries including Pete Seeger, Tom Paxton, Odetta, and Garrison Keillor and many others.

Steve with Reporter, Tom D’Antoni interviews Steve Einhorn in his Coffeehouse Conversation 88 at World Cup in Portland on 1/25/2017

Kate Power interviewed a year before with Tom D'Antoni here in September 2016.
An anecdote of a sweet memory from Bob Howard and the new Artichoke Music archive that goes back to a ﻿Wildgeese﻿ performance in 1982 and reconnection between fan and singer, Kate Power three decades later. 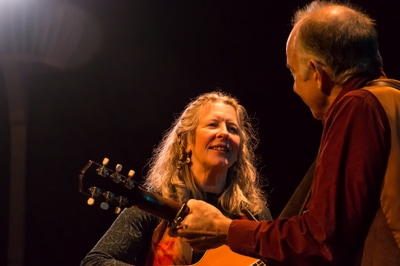 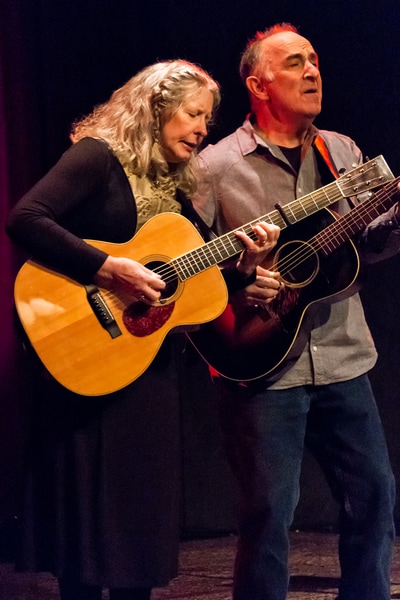 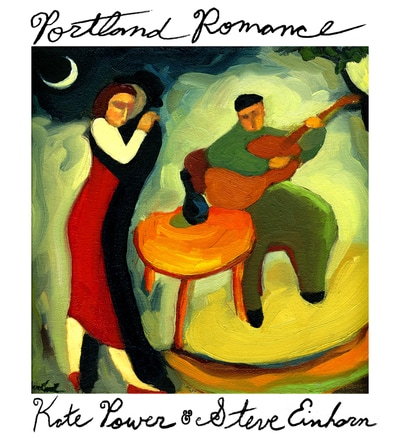 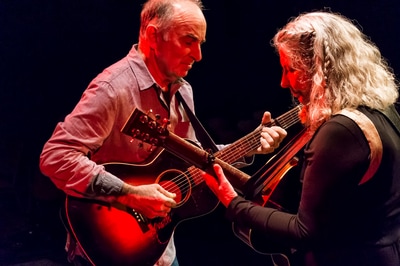 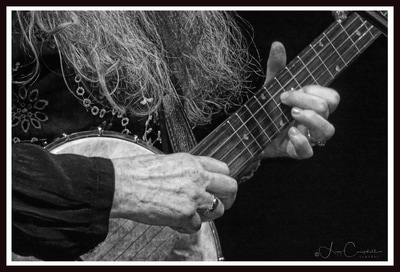 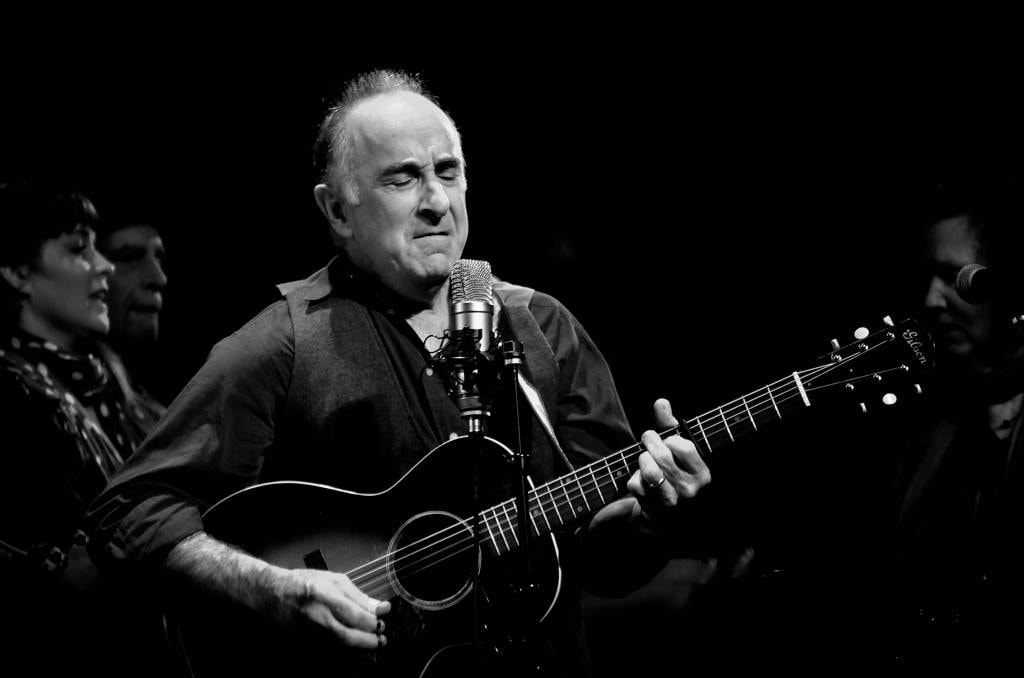 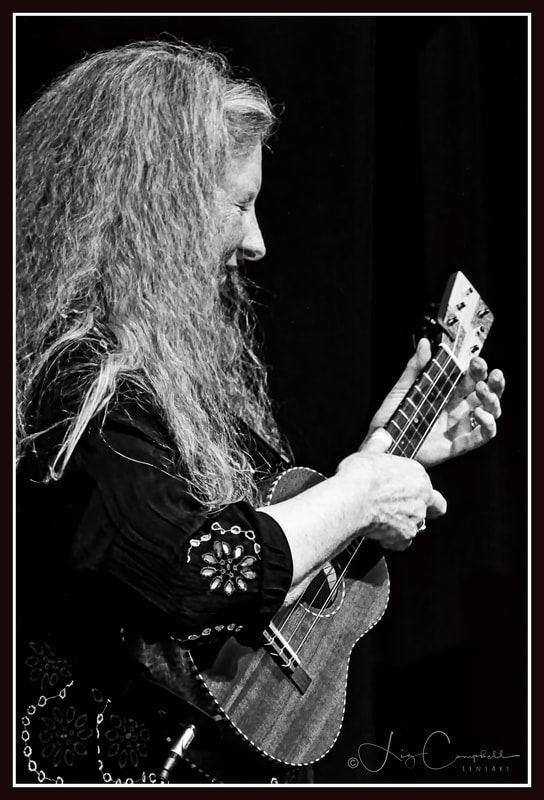 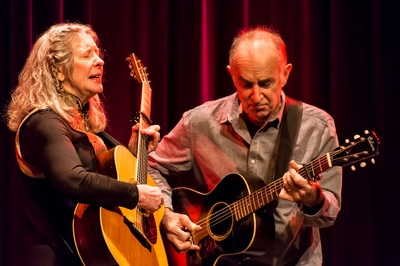 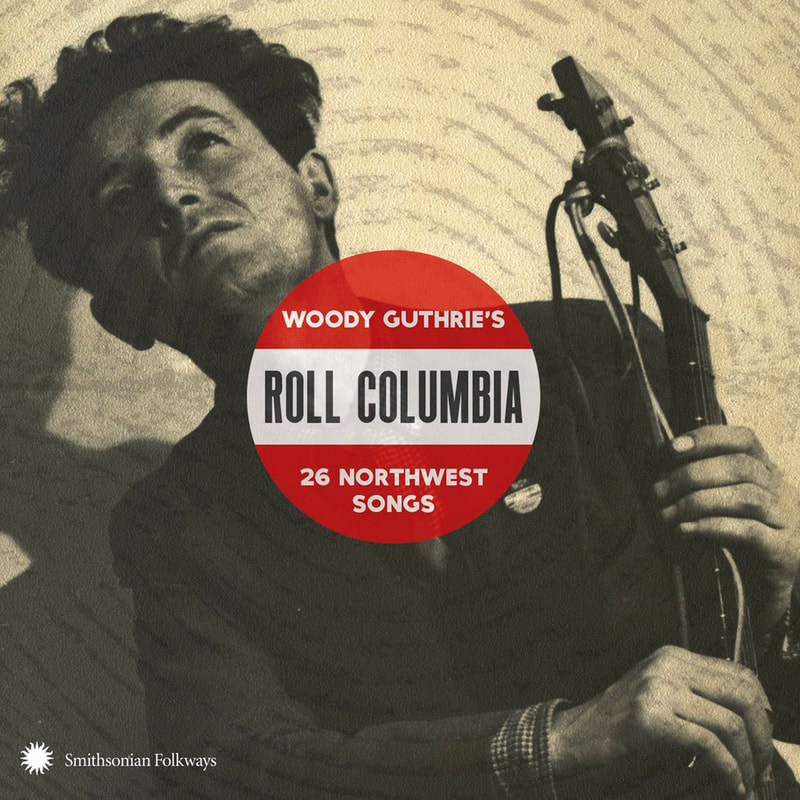 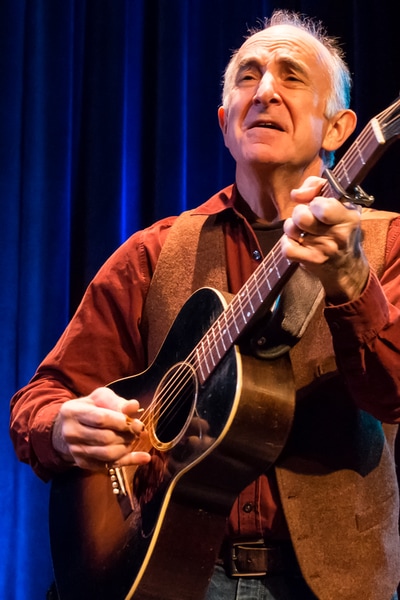 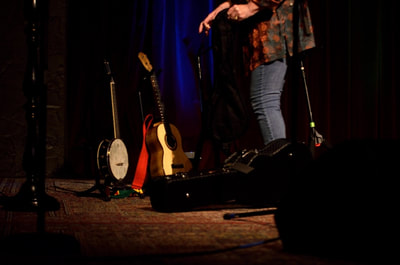 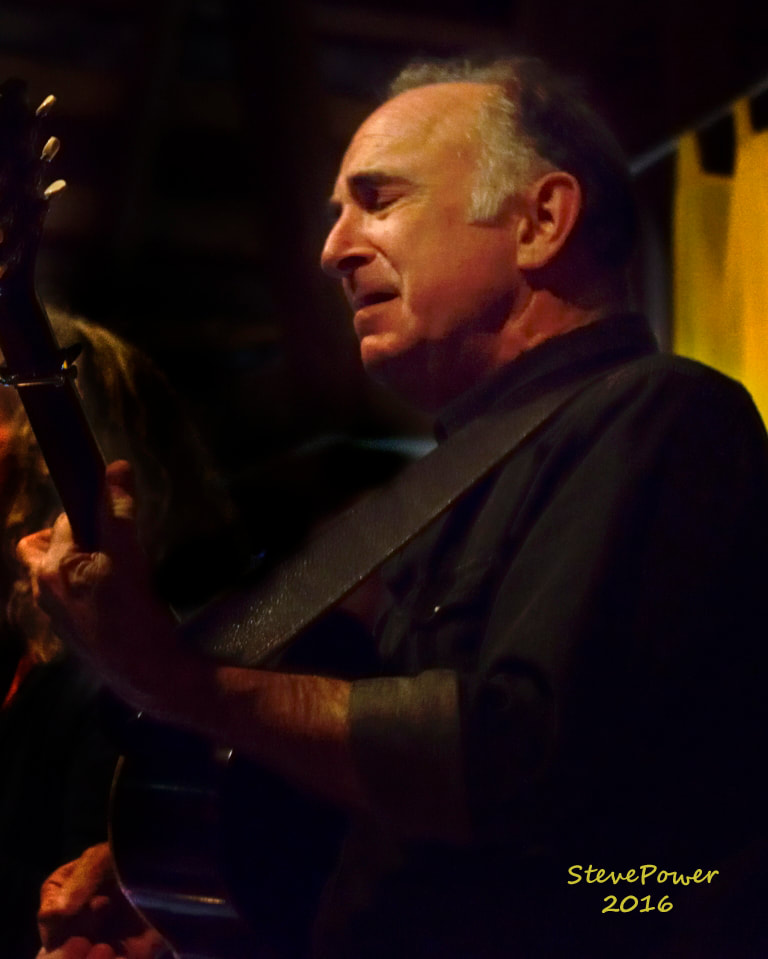 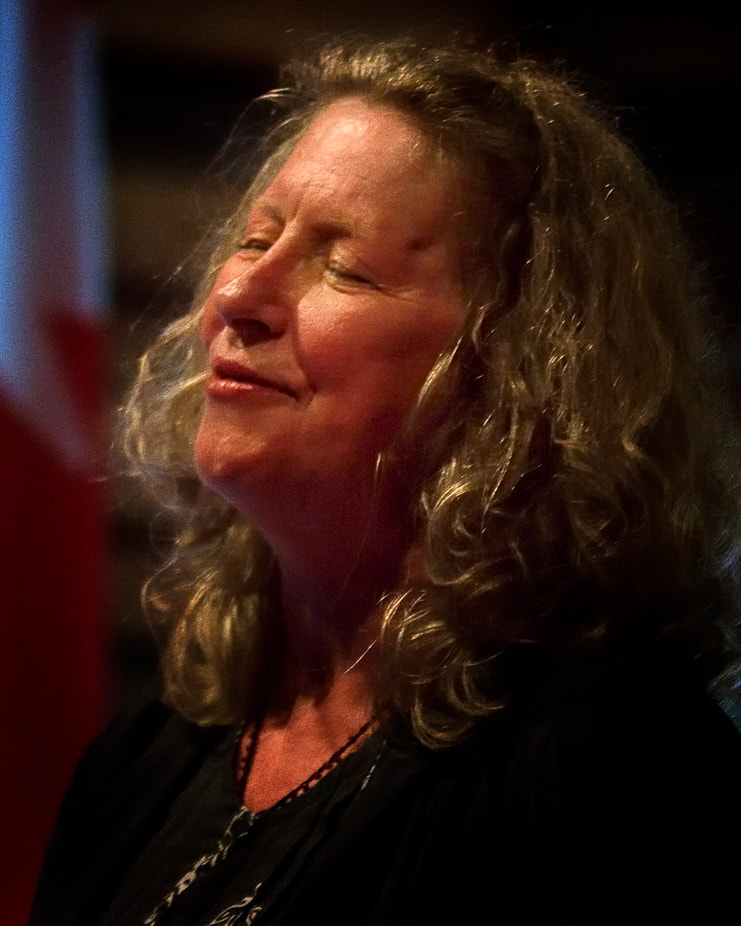 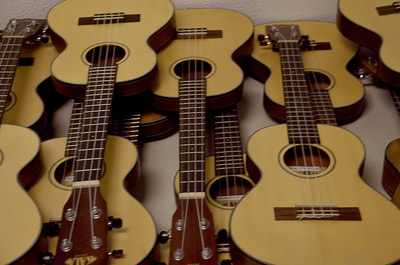 "So earthy and fresh is your music. I love it." - Lloyd "Tommy" Doss, Sons of the Pioneers
"Your music is wonderful! I love your harmonies. Keep on!" - Pete Seeger
"Kate & Steve are a tour de force in folk. Wonderful songs!" - Tom Paxton
"Steve & Kate are the Roy & Dale of folk." - Mary Flower
"Exquisite." - Eric Andersen
"You guys are the best - the absolute best." - Dave Carter
"Nice harmonies!" - Arlo Guthrie

"I am totally mesmerized by your compositions, your easy to listen to voices and great, great instrumentation. The quality of your work is outstanding. What joy you bring through your music. I would drop everything to come to hear you two." - Hal Melnick, NYC

New folk and trad roots in Americana, Kate & Steve "bring us to that place that can only be reached at the hands of journeyman artists. The power and precision of their performance gives [me] the complete trust to lean into the music, to get lost in it." - NW Examiner

"Sometimes we don't know what we have until we've lost it; other times we don't know what we've been missing until it enters our lives. Such was the case when Kate Power and Steve Einhorn introduced me to my first ukulele. My son and I have become addicted to this little musical powerhouse. Thank you, Quality Folk!" - Carter Brey, Principal Cellist, New York Philharmonic

In 2007, Steve Einhorn and Kate Power packed up a twenty-five year run at music folk hub, Artichoke Music in Portland, Oregon, and got into a bus with dozens of Kala ukuleles and an invitation to every non-musician they encountered across America to stop and learn to play ukulele on the spot - and sing! - in one fun hour of compassionate teaching. The Ukalaliens Workshop has achieved a popular reputation at libraries and community centers nationwide, and over the years these gatherings of dozens of uke-curious citizens has turned into thousands of new uke players around the country.

The Japanese word DOJO means "place of the way.”  In the tradition, the dojo is a place to practice martial arts; the Quality Folk Dojo provides a place to practice making music using songs to learn from and the guidance of Steve & Kate. The Quality Folk Dojo is a live invitational event in Portland on Tuesday nights, and the online dojo can be found here at www.qualityfolkdojo.com.

We hope to increase musical joy that people experience by sharing resources and influences that have enhanced our musicianship in the folk tradition. This project is an attempt to parlay our knowledge with a goal of having FUN in a playing-in-the-kitchen way using how-to basics, music insights, resources, tips and techniques. Songs and tunes are taught with an encouraging and supportive attitude.

The Quality Folk Dojo online is an extended resource created to help others to explore how to make music beautiful for the pure pleasure of it. 24/7 online access to a wide range of songs are taught from our personal repertoire, publications and experience, with some charts, tab and videos to help you to learn them on your instrument, sing them, and even harmonize to them. Our charts are often rustic (not fancy!) and basic - and may only contain the chords to the songs. This is based on the way we learned songs - first with our EARS, and then finding the key and chords for the changes. If we can't sing to it, we teach you how change the key (transpose!) You will find all kinds of topics and tips here; perspectives, instruments, song charts, tab, instructional videos, back stories, original artwork, songwriting tips, and anecdotal bits to help you unlock your music-making experience, live. This dojo is an organic 'live' document that will grow with our ability to add to it.

Quality Folk Dojo online is free. We encourage participation and welcome your comments, song requests, inquiries and contributions that may make this dojo an interesting destination for you to connect with. Members may contact us with requests and comments anytime - for songs to learn and techniques or charts to know more about. You can also suggest songs to add t0 the song page and, if it meets our criteria, we will develop a chart for it. We kindly reserve the right to choose material for this dojo, without obligation. That said, we look forward to hearing what you'd like to learn and sharing what we can.
Recent interviews with Kate & Steve on Oregon Music News

Oregon Music News reporter, Tom D'Antoni catches up with Power in a catch up at World Cup: http://oregonmusicnews.com/­tag/­kate-power/­

"The Ukalaliens Songbook: A Beginner's Guide To Ukulele Fun by Kate Power and Steve Einhorn is a charmer. Handcrafted by the authors, the book/CD boasts delightful illustrations by Steve and performances by both Steve and Kate. The songs are a blend of well-known traditional tunes and the author's originals all taught via the text and patient encouragements on the CD. A small and happy book for a small and happy instrument." - Jumpin' Jim Beloff, Flea Market Music.

Music2Life winner of the Grand Prize at the Texas Kerrville Folk Festival for her song, "Travis John" won a unanimous vote from a panel of folk icons that included Judy Collins, Tom Paxton, and Peter, Paul & Mary. Bill Margeson, WCDB and liveIreland dubbed Power "one of the great voices of our time" and poet, Kim Stafford quipped that Kate "writes from the beginning of time" with a keen knack that renders the familiar inside of new songs with a traditional feel.

Boston-born, Kate came of age during the folk revival in the 60's in New York City and "metropolitan New York" aka New Jersey. Underage, Kate was opening at fifteen years old for luminaries like Townes Van Zant and Loudon Wainwright III, and U. Utah Phillips in local coffeehouses and northeastern festivals where she established her place in the folk scene before her migration to Portland and the Pacific Northwest in 1977.

Kate's first recording was fostered by friend, Bothy Band musician and producer, Micheál O'Domhnaill, in a nod to Irish music with the band "Wildgeese" in 1983 (Celtic Music of the Great Northwest.) In 1994, Scottish fiddler, Johnny Cunningham, catalyzed and co-produced her Dancing in the Kitchen album with Steve Einhorn, a debut of original songs that remains a favorite. Since then, Kate has recorded numerous albums with music and life partner, Steve Einhorn, and she has been featured on several Hearts O'Space compilations, Celtic Twilight and Celtic Woman. Her sound and her listeners have expanded over time to cross borders between the traditional and the modern all in the name of folk. Kate's commitment to peace work, social justice and the environment is deeply rooted in community building through music. In recent years, Kate and Steve have brought thousands of new players into the music making fold with their fun and easy Ukalaliens® method while touring the countryside with a fleet of ukes-to-share. Their newest album is scheduled for recording with producer, Jon Neufeld (Black Prarie) in April 2016 for summer release. Kate & Steve flourish in harmony from their base in Portland, Oregon.

Steve Einhorn is a lifetime musician with a deep understanding of the relationship between the story and the song. Hands-on, he has been making music from an early age in the 60's in New York City to Boston and then to Portland and the Great Northwest since 1978. Steve's music originated in jugband favorites inspired by Jim Kweskin, bluegrass in Boston band, Foxfire and moved into original new folk in the Great Northwest, bringing many of the finer flavors of Americana with him.

The classic sound of his guitar lends rich and elegant backgrounds to a voice that growls warm with a sweet molasses and a shade of grit. New folk or traditional; Steve Einhorn is the groundwire who holds the audience in his hand with a deft wit that matches the warmth of his music. He delivers his songs with a sure hand that lends itself to good stories and songs you can feel. Genuine, warm and funny, Steve Einhorn carries music to fresh heights by playing it straight with a boundless love for guitar and a voice that has been singing for a lifetime.

Founder of "The Appalachian Philharmonic Jugband", Steve debuted at an early age with gigs at the Bitter End in New York City and various clubs in the mid-60's. He toured the northeast with Boston-based bluegrass band "Foxfire" before moving to Portland, Oregon in 1978. His early solo Kicking Mule release, "Whole World Round" became a regional favorite as his music for peace, the environment and countless causes for a better world grew his reputation in music activism. His guitar and harmonies are sought after and found behind dozens of recordings for popular artists in the Pacific Northwest.

Steve Einhorn's name was synonymous with his extraordinary music shop, a legend in Portland since 1981, Artichoke Music. Owner of Artichoke Music from 1981 through 2006, Steve inspired and taught thousands of people about music, instruments and songs and grew a deep and rooted reputation for making a better world through music and helping people get their start while running the shop and performing in the region all along.

In 2007 he handed off the duties of the shop to pursue the call as performer, recording artist, producer, visual artist & teacher, both at home in the Great Northwest and on the road with Kate Power.