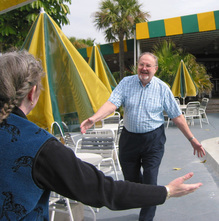 My father, Jack Power, showed me my first harmony notes on the piano at the age of four. His nickname for me was Kátidoo. I followed along, sometimes with his fingers atop mine, long before I was old enough to go to school. I loved that my dad enjoyed showing me how it worked as I scarfed it up - he had a gift for explaining - even to a small fry like me. As young as I was, music was my passion even back then, and I spent countless hours on the piano making up songs as far back as I can recall.

My dad passed away at the age of 92 during the total lunar eclipse on Easter weekend in 2015. While Steve went grocery shopping that day, I sat down to my Chickering upright and let my heart go back to those first times on the piano keys with my dad. Our connection quickly found its words in the song. By the time Steve had returned, Eclipse was finished and I had a song to sing to my father as he traveled on into his next adventure.

My little bit of my piano on this recording was a nod to this memory with my father. I played the primary accompaniment on Les Stansell's beautiful baritone ukulele made for me from Oregon wood - the most beautiful instrument I've ever had - and its the first song it played, even before its voice really settled in. Steve's guitar and harmonies and Jon's U-Bass filled the chorus in complement to the simplicity of the verses.