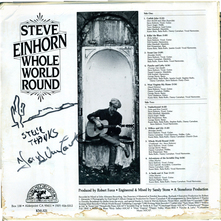 One of Steve's funnier moments behind the counter at Artichoke Music happened one bright hot summer afternoon when Townes Van Zandt rolled up in a beat up old pickup in 1983. The driver waited while Townes unfolded from the passenger seat and came in for strings and a thumbpick (that Steve gave him) before his gig at the East Avenue Tavern. Steve had just that day received a box of his Whole World Round records (yes, records) from Kicking Mule with his version of Pancho & Lefty on it. "Wait!" he said to Townes as he ran back to grab a copy to give to Townes, came back and handed it to him across the counter. Townes turned it over, looked on the back, and as Steve thanked him for writing the song, he tore off the cellophane, pulled a sharpie out of the breast pocket of his shirt and began to draw a cactus and signed it, "Thanks Steve, Townes Van Zandt". Then Townes handed the album back to Steve, signed and returned. Was there a better moment, or a funnier one?

I, on the other hand, had let Townes bum cigarettes off me in the boiler room that served as the Green Room off the kitchen at the Thirsty Ear folk club in Morristown, NJ before I opened for him in 1967. I was 16 and Townes was already legendary - "the songwriter from Texas." We were all in awe of his raw, skinny presence as he hung over his guitar and sang his songs into the night with his bangs waving over his right eye as we hung on his every word. His songs rang true and his personae was of a road weary and unpretentious poet. Pancho & Lefty came out on his album of the same name in 1972 but he sang it on the road long before that recording. Tony Carrillo, the scout who was there that night and signed Townes the week after that performance, offered me a similar contract - but I was still a kid and not ready to think about monetizing songs I was writing - that aspect confused me. I liked the freedom of being a songwriter without strings. It's no mystery that I married a man who knew this song like the back of his hand.
Townes Van Zandt Sings 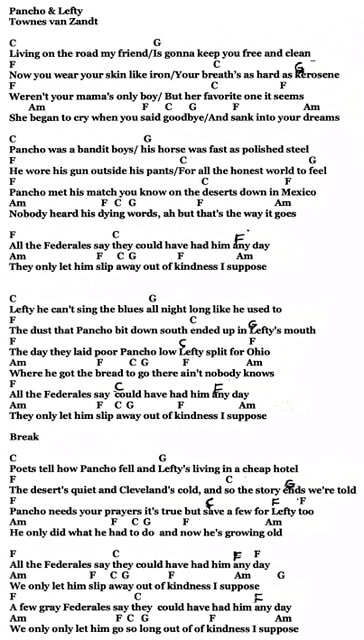